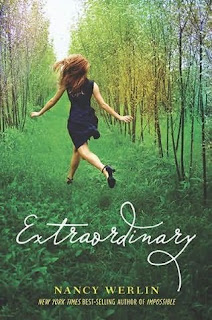 Pages: 390
Phoebe finds herself drawn to Mallory, the strange and secretive new girl at school. Soon the two become as close as sister . . . until Mallory's magnetic older brother, Ryland, appears. Ryland has an immediate, exciting hold on Phoebe--but a dangerous hold, for she begins to question her feelings about her best friend and, worse, about herself.
Soon she'll discover the shocking, fantastical truth about Ryland and Mallory, and about an age-old debt they expect Phoebe to pay. Will she be strong enough to resist? Will she be special enough to save herself?

The cover on this book is just gorgeous in my opinion. I love the dark green grass, the coloful trees, and the outfit the girl is wearing. It's colorful and inviting . . . until you read the text. I have to say that I was very, very dissapointed with this book.

At the begining of this book I wasn't hooked, but I figured I would give it some time, maybe a hundred pages, and then I thought I would be tearing through it just dying to find out what the big secret is and how the relationships turn out.

Half way through the book, Phoebe still didn't know that Mallory and Jason are some sort of faeries, and she didn't know her destiny or anything. It was a very, very slow pace.

One thing in particular I didn't like was the character Ryland. At first I thought, wow: a secret relationship with a dreamy guy from "Austrailia." But, he was six years older than her, he told her to loose weight, told her she wasn't beautiful, and was just overall very rude to Phoebe. Just in little, everyday things. I hated his personality, like he thought he owned her. The whole time he was just putting her down and trying to seduce her. I have no idea whatsoever why she was attracted to him and why she stayed with him.

Overall the book just didn't keep me interested and it took me four days to get half way finished with it! You can give the book a shot, but I won't be recomending this book to my friends.