The Power of Six

The Power of Six by Pittacus Lore 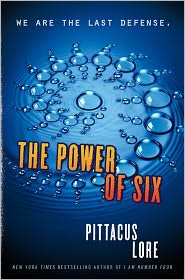 Pages: 406
I'VE SEEN HIM ON THE NEWS. Followed the stories about what happened in Ohio. John Smith, out there, on the run. To the world, he's a mystery. But to me . . . he's one of us.
Nine of us came here, but sometimes I wonder if time has changed us -- if we all still believe in our mission. How can I know? There are six of us left. We're hiding, blending in, avoiding contact with one another . . . but our Legacies are developing, and soon we'll be equipped to fight. Is John Number Four, and is his appearance the sign I've been waiting for? And what about Number Five and Six? Could one of them be the raven-haired girl with the stormy eyes from my dreams? The girl with powers that are beyond anything I could  ever imagine? The girl who may be strong enough to bring the six of us together?
They caught Number One in Malaysia.
Number Two in England.
And Number Three in Kenya.
They tried to catch Number Four in Ohio -- and failed.
I am Number Seven. One of six still alive.
And I'm ready to fight.

... I am speechless. Just mere minutes after finishing this book, and I have nothing to say. Well, actually I have a lot on my mind, I just can't get over how totally amazing this book was! If you haven't read I Am Number Four, then go out and get it. And you might as well pick up The Power of Six while you're at it.

Let me just say, Six is a beast. She is like my all-time favorite heroine ever! She is strong and brave and has her head screwed on right, unlike John in this book. She is just kick ass awesome.

I loved near the end when Sam and John break into the Mogadorians' cave. It is just the action and all the fighting I know Lore is capable of giving, and I loved it. I just ate it up, and now I'm very satisfied with the turn out of the book.

Overall I am just psyched to have read this book, and I just have to say, if you haven't read it, GO GET IT!