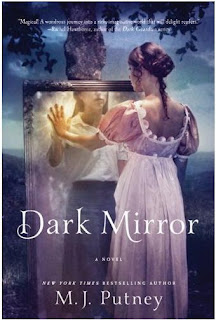 Pages: 304
At sixteen, Lady Victoria Mansfielf, youngest daughter of the earl and countess of Fairmount, is destined for a charmed life and her choice of mates worthy of her status. Then she makes a terrifying discovery that will ruin her life and disgrace her family forever. Tory's blood is tainted . . . by magic.
When a shocking accident forves Tory to reveal her despised skill, she is immediately exiled to Lackland Abbey, a reform school for young men and women in her position. Tory's greatest wish is to be cured so she can return home and perhaps recover some of her shattered life.
Instead, curiosity and the lure of magic lead Tory to rebel students who have pledged their talents to protect England. As she joins them in their secret studies, she discovers her full powers - and is drawn to the handsome, enigmatic young Marquis of Allarde. But Allarde's reserve and haunting secret keep him away, though she can see equal longing in his eyes.
Then Tory's pledge sweeps her and her friends into a perilous world of danger, challenge, and a triumph that saves Britain from conquest. can danger also bring Tory and Allarde together, despite all that stands between them?


The plot here was just stunning. Many times sorcery and witchcraft can be so strange and different it's hard to believe it's real. But this book draws you in and you almost have to believe that magic is real.
This is the story of sixteen-year-old Tory Mansfield. She's the daughter of an earl, beautiful, and interested in the cute boy Edmund. But, she wakes up from a dream floating above her head, and her world comes crashing down - literally. She thinks she can keep her magic under control, but she sacrifices her family's name to save her nephew Jamie. It's then that she is sent to Lackland Academy. It's a school to teach mages (people who have magic in their blood) how to control their powers and get back to normal. Here she meets her uptight roomate who despises her, a young rebel named Elspeth, and a flirtatious and humerous boy named Jack Rainsford. But, what most people don't know, is that below the school is a secret labyrinth filled with magic where rebel students meet. Here Tory learns to control her power and use it to her full extent. And here she is also drawn towards Allarde. But, he is keeping his distance. After a terrifying raid in the labyrinth that could have had Tory locked away for using her magic under the school, Tory falls through Merlin's mirror and ends up in war stricken England in 1940. She knows she has to get home, but what she doens't know, is that she and her friends will be coming back, to save them all.
The book was slow to begin with. It took me a while to get into it, although I didn't have much time to read until today. But, once I got to about page 80, it was like the book came alive. Although the plot could be confusing at times because I don't know magic and don't understand how it all works, M. J. Putney did a great job at describing how it worked and felt.
Tory was a sweet girl, really a brave heroine, and full of life and mischief. One thing I liked about her was her stubbornness. She spoke her mind and wouldn't take no for an answer. But, at the same time she was willing to obey her teachers and follow the rules at Lackland.
At some parts to this book, things just seemed to hokey. When she first arrived in England in 1940, Nick and his family were all-too accepting of her and her powers. I highly doubt if someone came up to me and told me they were a mage from 1803 I would believe them. But, in the end, it pays off that they were so accepting of her and willing to learn magic.

Another time in the book that seemed too good to be true was towards the end, but I'm not going to ruin that part for you. The ending was so beautiful it brought tears to my eyes. I just absolutely loved the ending. It made up for the begining being slow, and all the times I was a little confused. I just wanted to jump into the book and take Tory's place. I can't even describe how much I loved the ending. You'll have to read it and feel it for yourself.