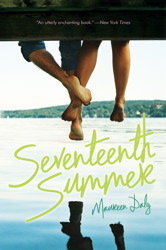 Pages: 340
A summer to remember. . .
Angie always thought high school romances were just silly infatuations that come and go. She certainly never thought she wuold fall in love over one short summer. But when she meets Jack, their connection is more than a crush. Suddenly Angie and Jack are filling their summer with stolen moments and romantic nights. But as fall grows closer, they must figure out if their love is forever, or just a summer they'll never forget.

I was given some advice from a friend to shorten my reviews. She told me I didn't need to re-explain the summary of the book, so I'm not going to this time. I'm going to try something new!

I've just been dying to read this book for months and finally picked it up at B&N the other day. I'm realy glad I did too. When I was reading the book, there were little things that stuck out to me and I thought they were a little odd. I just didn't expect those things to happen in today's society. So, I looked at the copyright page and it said that Maureen Daly wrote this book in 1942 while she was in college! Then it made a lot more sense of how the characters acted and their feelings, and just descriptions of their house, clothes, and the town. This was a really great book because of the fact that it was written and takes place in the 1940's.

Angie is seventeen and has just graduated from high school. In the fall she is going to college, but in the mean time she has all summer to relax. And that's when she meets Jack. I just love their  first little date out on Jack's boat. It was sweet and romantic! I just wish the author had incorperated the boat into the story more often than she did. That was the only time they went out on it, and that was sort of dissapointing. I love Angie as a character though. She was sweet and innocent. She is a shy girl and not used to dating or boys in general. Sometimes she could be self-concious and she really cared about what Jack thought of her. One of the things I really liked about her was that she always had her mom's approval before she did anything. She was a very responsible character.

Jack was a great character too. He was a charming boy that all the girls wanted to date, but he wasn't anything like a player. He was very aware of Angie's feelings and he respected her. Jack was pretty smooth and relaxed with Angie and his friends, but everytime he was around Angie's family he became shy and nervous and clumsy. It was quite cute! One thing I thought was odd though, was that Angie never went to his house or met his parents. Maybe that was just the way it was back then, I don't know.

The ending was a little dissapointing for me. I think I am used to big fairy-tale endings and I expected a turn of events and for the two of them to do something rash and sudden. Though nothing spectacular happened, it was a good way to end the book. It wrapped things up nicely and is was a very appropiate ending for this book.

Overall I think this is just a really adorable love story that everyone should read. It can be very interesting at times to think and learn about some of the rules about "going steady" with someone, and the fact that even after graduating high school Angie's parents thought she was too young to see Jack.