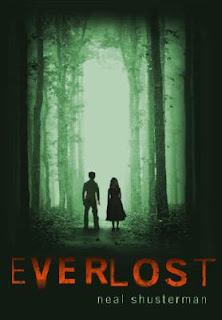 Pages: 313
NICK AND ALLIE DON'T SURVIVE THE CAR ACCIDENT . . .
. . . but their souls don't exactly get where they're supposed to go either. Instead, they're caught halfway between life and death, in a sort of limbo known as Everlost: a shadow of the living owrld, filled with all the things and places that no longer exist. It's a magical, yet dangerous place where bands of lost children run wild and anyone who stands in the same place too long sinks to the center of the Earth.
When they find Mary, the self-proclaimed queen of lost kids, Nick feels like he's found a home, but Allie isn't satisfied spending eternity between worlds. Against all warnings, Allie begins learning the "Criminal Art" of haunting, and ventures into a dangerous territory, where a monster called the McGill threatens all the souls of Everlost.

I really enjoyed this book. It's unique and I've never thought before of a place between Heaven and Hell. Maybe ghosts, or Afterlights, really do exist...

Nick's car crashes into Allie's car and neither one of them is wearing a seatbelt. They are hurtled out of the car and heading towards the light, but when they bump into each other, it throws them off course. Nine months later, they wake up in a forest where a little boy they call Leif, welcomes them to Everlost. When they cross into Everlost though, they look exactly how they looked when they died. So Nick has chocolate smeared on his face from the chocolate bar he was eating. Allie is not content though, and is determined to see if her father survived the crash and how her family is. So, the three of them set off. But instead of Allie's house, they wind up at the Twin Towers. They crossed over into Everlost  and now a girl called Mary and about 230 kids live there. Mary is watching over them and she believes she knows all there is to know about Everlost. Nick is in love, Lief is mesmerized by Pac Man, but Allie is suspicious. She thinks Mary is hiding something, so she tries to learn the skill of haunting, which Mary pretty much outlaws. She drags Nick and Leif with her. When things go terribly wrong and they are faced with the McGill, they will have to fight to survive... escape.

This book was riveting and marvelous. I just can't get over it! It's absolutely amazing how smart Allie is and how manipulative she is. She is cunning and just adds so much color into this story. The main characters of the story are Allie and Nick, but I liked Allie more. And not just because she is a girl. She is the brains of the whole opperation until the very end.

I absolutely loved the ending of this book. The fight of the McGill, the McGill's secret, Mary's secret, just how the book unravels. It was spectacular! I love Allie's decision and what she plans to do with her life. It was a pretty brave decision and I think she and one of the other characters are falling in love. My favorite character's ending was Nick's though. He discovers a secret greater than life itself. He plans on spreading the word... but someone is trying to stop him. The epilouge, though short, was epic.

I would recomend this book to everyone. I don't think there is anyone out there who wouldn't enjoy this book! Add to TBR lists!