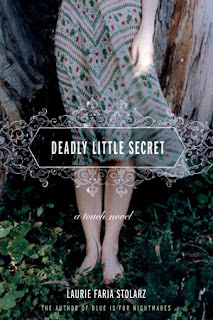 Pages: 252
SOMETIMES SECRETS SHOULDN'T BE KEPT. . . .
Until three months ago, everything about sixteen-year-old Camelia's life had been fairly ordinary: decent grades; an okay relationship with her parents; and a pretty cool part-time job
at the art studio downtown. But when Ben, the mysterious new guy, starts junior year at her high school, Camelia's life becomes far from ordinary.
Rumored to be somehow responsible for his ex-girlfriend's accidental death, Ben is immediately ostracized by everyone on campus. Except for Camelia. SHe's reluctant to believe the rumors, even when her friends try to convince her otherwise. Instead, she's inexplicably drawn to Ben . . . and to his touch. But soon, Camelia is receiving eerie phone calls and strange packages with threatening notes. Ben insists she is in danger, and that her wants to help -- but can he be trusted? She knows he's hiding something . . .but he's not the only one with a secret.

What is it with me a creepy books today? Although, Choker wasn't nearly as extreme as this- not at all. Intense, suspensful, creepy, and pure terror, are the first words I can think of to explain this book- this first in the TOUCH series. I should have guessed by the title this would be a very intense book.

Camelia is a sixteen-year-old girl who most certainly doesn't have a normal life. Three months ago she was saved from being hit by a car by a mysterious guy on a motercyle. Now, at the start of school, the mystery guy is back. Although he denies saving her, she knows it is him. Camelia is not very close with her parents, and left home alone quite often. She usually turns to her friends Wes and Kimmie when things happen. Which is exactly what she does when she recieves a picture of herself in the mail with a heart around her. She doesn't think too much of it and thinks it was a joke. But neither of her friends know what she is talking about. And a few nights later, there is a present delivered in her window by a secret stranger. Its lingerie she and Kimmie had been looking at earlier that day in the mall. She recieves phone calls and more pictures, and she knows somebody has been in her house. There is one suspect: Ben, the mystery guy that has a reputation of killing his last girlfriend. Although, no matter how horrible the rumors are, Camelia can't bring herself to believe them. She knows he is not behind this and on her side. But, he is holding a secret so powerful, it could change everything.

Talk about the creeps! Once I opened this book, I just sat on my bed for two hours reading it. There was no way I could get up without finishing this and figuring out who was behind it, why, and what was going to happen to Camelia. This book was so gripping it was insane. It's a book you can't read unless it's in one sitting.

The characters in this book were so dynamic and well rounded. Everyone of the characters could have been a suspect. I had nooo idea what to expect and I was guessing throughout the whole book who was behind the "stalkerism." I must say, I did like the ending. It was the perfect character behind the plot. I'm not going to say any more about this character in fear of giving away anything, but I absolutely loved it!

If you have a short horror tolerance level, you might not want to read this book. Yes, I will probably have nightmares tonight, but I think it was worth it. So, if you have a short horror tolerance level and you are up to the challenge of reading this book, and the series (which I hear gets even more creepier) good for you!! Have fun being scared for once(: I know I'm enjoying right now! It's a little bit of a rush, to be honest.