I Am The Messenger

I Am the Messenger by Marcus Zusak 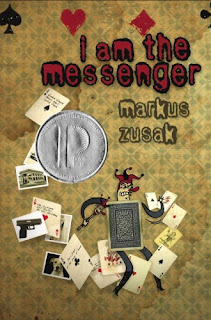 protect the diamonds.
survive the clubs.
dig deep through the spades.
feel the hearts.
Ed Kennedy is an underage cabdriver without much of a future. He's pathetic at playing cards, hopelessly in love with his best friend Audrey, and utterly devoted to his coffee-drinking dog, the Doorman. His life is one of peaceful routine and incompetence until he inadvertedly stops a bank robbery. That's when the first ace arrives in the mail. That's when Ed becomes the messenger. Chosen to care, he makes his way through town helping and hurting (when neccessary) until only one question remains: Who's behind Ed's mission?
The plot is really different. When I got the book I was so excited to read it. It sounded like a mystery and I really wanted to find out what was behind the aces. It was scary, exciting, and laugh-out-loud funny at some points. But it also dissapointed me.


The book opens in the middle of a bank robbery. It's suspensful and just wonderful. When Ed Kennedy stops the bank robber, he doesn't expect what the bank robber tells him: "You're a dead man. Remember it everyday when you look in the mirror." And then he gets the first ace. It has three adresses on it. Once he goes to the peoples' houses and learns shocking - and disturbing - discoveries, he decides that he has to help them. One the first ace is finished, he gets a second, a third, and a fourth ace. There are so many people he has to help in this one town.Proxy-Connection: keep-alive
Cache-Control: max-age=0

nd some of them are his friends. And not to mention, the whole time he is being tracked. Men are in his house, in his cab, and in his life. But one question remains throughout all of this: who sent the aces?
Ed Kennedy is 19 and too young to be driving a cab, yet he does anyways. He has no motivation in life. Just to sit around and play cards with his friends and dog... who drinks coffee. He also is almost like a mindreader. Or else he just likes to talk to people in their minds and he just assumes they know what he is thinking. It's kind of weird. But I liked going through the story and watching how his character changed and how his view of life changed along with his heart.

The ending was confusing though. I'm not going to tell you what happens, but the book unfolds and your at the end thinking OMG! what is going on?! and the end happens and I was just like... what a bust. The theme of the story was beautiful:  everyone can live beyond what they are capable of. The book had a good idea, but I don't think it was exactly carried out in the best way. It's worth a read, just not one of my favorites.