Okay, so I just found this book and I read a few reviews and summaries for it and it just sounds amazing!!! I was going to post it for my Waiting On Wednesday feature, but I just couldn't wait! So, here it is! Starcrossed: 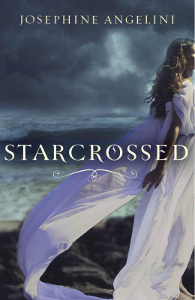 Helen Hamiliton has always tried to hide how different she is—no easy feat on an island as small as Nantucket, and only getting harder as she finds herself haunted by hallucinations and vivid nightmares.
It’s not until she crosses paths with Lucas Delos at school that Helen’s true heritage is finally revealed. Yet even as Lucas helps her awaken to her startling powers, they can never be together—not unless they can break free from the tragic destiny the Three Fates have in store.
Oh my goodness! This book sounds amazing! And I know that this doesn't describe it in the best way, but the review I read sounded sooooooooo good! And this book takes place in Greece! :D 1000x better! In case you didn't know, Greece is a little obsession of mine. (:
Starcrossed is being released on May 31, 2011! Watch for it!
﻿
Posted by Katie at 7:34 PM