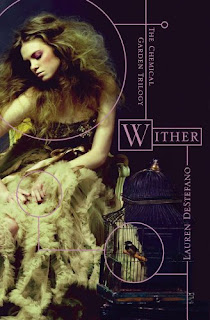 Pages: 358
WHAT IF YOU KNEW EXACTLY WHEN YOU WOULD DIE?
Thanks to modern science, ever new-born has become a ticking genetic time bomb - males only live to age twenty-five, and females only live to age twenty. In this bleak landscape, young girls are kidnapped and forced into polygamous marriages to keep the population from dying out.
When sixteen-year-old Rhine Ellery is taken by the Gatherers to become a bride, she enters a world of wealth and privilege. Despite her husband Linden's genuine love for her, and a tenuous trust among her sister wives, Rhine has one purpose: to escape - to find her twin brother and go home.
But Rhine has more to contend with than losing her freedom. Linden's eccentric father is lbent on finding an antidote to the genetic virus that is getting closer to taking his son, even if it means collecting corpses in order to test his experiments. With the help of Gabriel, a servent she is growing dangerously attracted to, Rhine attempts to break free, in the limited time she has left.

I have been waiting for a new trilogy that can compete with The Hunger Games, The Maze Runner, and the Chaos Walking trilogies. And I have finally found one! From the moment I picked up this book I knew I would love it. I can't believe it took me this long to read it!

I loved the characters in this book. Rhine herself is so beautiful and smart, I just love how her kindness spreads through the book. I really enjoyed her sister wives too. Cecily was young and hyper (and very, ver bossy!), and Jenna was the quiet observer who knew a lot more than you think. Linden, Rhine's husband was not one of my favorite characters. He was very out of it. But, his father, was very in. He had such a tight control over Linden and the staff and the wives, it was amazing. He was the all-seeing eye. He was creepy and eccentric and actually one of my favorite characters!

Gabriel was a pretty good character too, I just wish that he was more involved in the book towards the end. It really would have helped to convince the readers that they were in love.  Honestly, I thought Rhine got too close to Linden. I hope that Rowan (her twin brother) is more involved in the next book also. He seems like a great character and I'd really love to get to know more about him!

This plot was so beautifully written. It is one of those books where, not a lot happens, yet a lot does... if you understand what I'm saying. I didn't feel like there was that much action or anything, it probably could have been a slow read for some people. But I was so intrigued by the plot and I wanted to see what would happen to Rhine and how she would escape without Housemaster Vaughn realizing it.

I have to admit, I cried in this book. Parts of it were sad, but they really helped shape the book. I love the ending, and it's unexpected twists! I really want to find out if Housemaster Vaughn really was working on an antidote in the basement. I can't wait for the second book in this trilogy to release! If you haven't read  Wither, you need to!

Overall Rating: 5 Stars
Posted by Katie at 9:07 AM