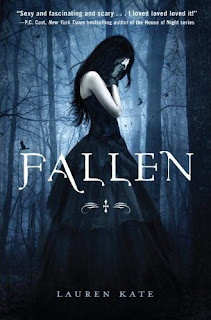 Pages: 452
There's something achingly familiar about Daniel Grigori.
Mysterious and aloof, he captures Luce Price's attention from the moment she sees him on her first day at Sword & Cross boarding school is Savannah. He's the one bright spot in a place where cell phones are forbidden, the other students are screwups, and security cameras watch every move.
Except Daniel wants nothing to do with Luce - he goes out of his way to make that very clear. But she can't let it go. Drawn to him like a moth to a flame, Luce has to find out what Daniel is so desperate to keep secret . . . even if it kills her.
Dnagerously exciting and darkly romantic, Fallen is a page-turning thriller and the ultimate love story.

This book took me a long time to finish, although I don't think it's because it wasn't interesting, it was because of my busy schedule. It did take some time for me to get into the book and really want to finish it and find out what's going to happen. I was pleasently surprised with the outcome of this book.

Lucinda Price, Luce, is a seventeen-year-old girl with a tragic past. When her boyfriend Trevor dies and she is blamed for his death, she is sent to Sword & Cross. It's a reform school for kids who have messed up in the past. Luce only gets one phone call a week and she has to attend boring classes. On her first day she meets Arriane who shows her around Sword & Cross, she meets Daniel Grigori who flips her off, and she has a disastorous encounter in the cafeteria with some meatloaf and a horrid girl named Molly. Things don't start off well for Luce, but things can only get better right? She is drawn to Daniel in a mysterious way and he seems oddly familiar, but she can't figure out why. Luce meets Penn, who has inside links to the school, and together they start to track down Daniel's past. But, there is very little to find about Daniel. It's all a secret. And Luce is determined to figure it out. But, who can she trust?

Usually I focus on the main character in books, but this time I'm going to focus on Daniel. Even though the book is about Luce, it's just as much about Daniel. Daniel is dreamy and sexy and just seems totally irresistable. Better than Edward Cullen? I think so. Daniel is definately a character I would meet in person if he were real. I'm going to mention some spoilers next, so if you'ev read the book and want to know what I think, or you don't care if I spoil it a little bit for you, highlight the text after this:  His love is so deep and beautiful, and I love how he waits seventeen years at a time just to get a few months with Luce. He is so devoted to her and it's just beautiful. I really loved briefly hearing about all the times they were together: dancing at the ball, climbing into her castle, carrying her through Jerusalem, and  I find it hilarious (but not very surprising) that Daniel was a monk in Tibet!

This book was haunting and mysterious and so fascinating. I've been told to read this book so many times and now I can't believe it took me this long to read it! I absolutely love the outcome of this book, especially the epilouge! The ending has such a huge twist! It was so surprising and enticing and I can't wait to read the sequel. If you've never read this book, you need to add it to your TBR list.

*On a side note, I know I posted that I'd have this review up on Monday, but I found some spare time today to finish the book! I'm sorry it took so long for this review!