Dust and Decay by Jonathan Maberry 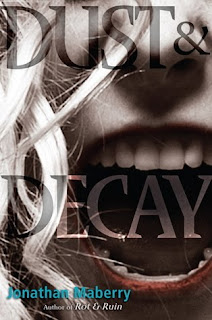 Six months have passed since the terrifying battle with Charlie Pink-eye and the Motor City Hammer in the zombie-infested mountains of the Rot & Ruin. It’s also six months since Benny Imura and Nix Riley saw something in the air that changed their lives. Now, after months of rigorous training with Benny’s zombie-hunter brother Tom, Benny and Nix are ready to leave their home forever and search for a better future. Lilah the Lost Girl and Benny’s best friend Lou Chong are going with them.
Sounds easy. Sounds wonderful. Except that everything that can go wrong does. Before they can even leave there is a shocking zombie attack in town. But as soon as they step into the Rot & Ruin they are pursued by the living dead, wild animals, insane murderers and the horrors of Gameland –where teenagers are forced to fight for their lives in the zombie pits. Worst of all…could the evil Charlie Pink-eye still be alive?
In the great Rot & Ruin everything wants to kill you. Everything…and not everyone in Benny’s small band of travelers will make it out alive

I know that it is Friday, but I have been swamped! Doesn't this book sound amazing? This is the sequal to Rot & Ruin. If you haven't had the chance to read it, you still have time to catch up on the series! Dust & Decay releases in August 2011. Keep your eyes open for it!
Posted by Katie at 3:33 PM