Only You, Sierra by Robin Jones Gunn 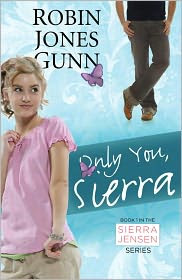 Pages: 115
Sierra was nervous about the future. She had always been the bold, free-spirited type. But then, her whole foundation of home and family had never before been rocked.
Sierra Jensen settled back into her seat and gazed through the train window at the English countryside. So much was on her mind, and her heart was flooded with emotions. She hoped the friendship she had made with Katie and Christy the past week during the Europe mission trip would last forever.
She dreaded the flight back to the States, knowing that everything would be completely different when she returned home. While in England, Sierra's family had moved to a different state. She hated the thought of going to a new high school in the middle of her junior year, where everybody already had their cliques and boyfriends. The prospect of another dateless year made her heart sink.
She wondered if she'd ever find love, and then in a London airport, she met Paul. Her heart, which had sunk so low, leapt! But of course, it was just a chance meeting...wasn't it? She would never see him again...would she?

The characters from Christy Miller are in the very beginning of this book, and they didn't fail to put a smile on  my face and a giggle on my lips. They are only in the first few chapters though, so that was a good and a sad thing. Sierra seems like a great character I can't wait to get to know. She seems to be stuck up, but she isn't. She is a small girl who is not afraid to say what she feels. She is strong, but still a growing teenage girl. I just loved her personality and I was wrapped into it.

The other minor characters in the book where pretty cool too. She has four brothers and an older sister which would be tough, hectic, but fun! Her grandmother's mind is fading which makes for an interesting plot. Sometimes she confuses Sierra with her daughter Emma. Being in that situation would be tough, and I feel that Sierra handles it quite well.

Overall I really enjoyed the first book in this series. It is full of God-things and I love that in books. The plot in this book was very realistic and that was a plus. I'm at the same age Sierra is, so I can relate to a lot of her problems -- like boys, cars, and cell phones! I have high hopes for the rest of the series and I can't wait to get my hands on the rest of them!