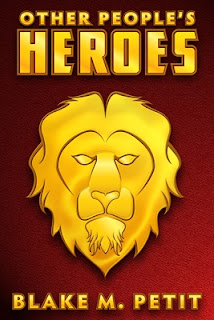 E-Book
Josh Corwood has spent his life admiring the superheroes that protect Siegel City. He's wanted to join them, wanted to be like them... but eventually, had to settle for reporting on them from the sidelines. When an undiscovered talent reignites his hope to join the world's protectors, he suddenly discovers that their world isn't everything he'd been led to believe. Surrounded by false idols, Josh decides to turn the tables on them and reveal the greatest con game in history... and hopefully, in the process, find the real heroes that have long been gone.
For me, this book took a little time to get into. It was a little slow at first and I wasn't sure if I was going to like it, but about a fourth of the way through the book things started to heat up! Once I got through the begining, I couldn't put this book down.

Josh Corwood was a peculiar character. He wanted revenge on the superhero headquarters, but then changed his mind. And he was very protective of Miss Sinastah. He was very mindful of her feelings. I really liked that. He also wanted to prove himself. He wanted so badly to be like Lionheart and to be a real superhero and help people, even if it went against what the leader said. He was such a fun guy, a little awkward and quirky. I loved it!

The ending "fight scene" might have gone on a little too long in my opinion, but I was expecting it. It's a superhero book! There has to be some action! Another thing is that there are tons of characters in this book. At times it could be a little confusing trying to remember who was good and who was bad and what peoples' real names were and what their superhero names were. At some points in the book I was confused, but in the end I understood what was going on.

Overall I thoroughly enjoyed this book. I don't think I was expecting to love it as much as I did. I'm not a huge superhero fan, but I thought it would be nice to read something different. And I'm sure glad I did. This is a fun, exiting and thrilling, fast-pace read that will make just about every reader happy.