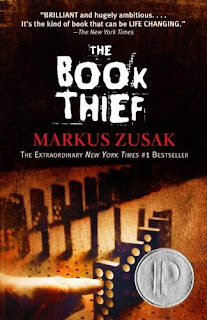 The Book Thief by Marcus Zusak
It’s just a small story really, about among other things: a girl, some words, an accordionist, some fanatical Germans, a Jewish fist-fighter, and quite a lot of thievery. . .
Set during World War II in Germany, Markus Zusak’s groundbreaking new novel is the story of Liesel Meminger, a foster girl living outside of Munich. Liesel scratches out a meager existence for herself by stealing when she encounters something she can’t resist–books. With the help of her accordion-playing foster father, she learns to read and shares her stolen books with her neighbors during bombing raids as well as with the Jewish man hidden in her basement before he is marched to Dachau.--
This is an unforgettable story about the ability of books to feed the soul.
So, when a book is written by Death, it captures your attention. I knew, just by reading the summary that this book was going to be amazing. After reading just a few pages, I knew it was a book for me. So, The Book Thief takes place in Nazi Germany under the rule of Hitler. Death narrates the story which is unusual and reallly captivating. Death teels the story of Liesel Merrminger who he meets the day her brother dies. Death is intrigued by her because she escapes him three times. But that's for later in the story. When Liesel moves in with her foster parents Hans and Rosa Huberman, her life changes. She meets Rudy, her neighbor who is in love with her and always wants a kiss. Unable to read, Liesel is failing in school. Hans, her papa, teaches her to read. When the Hubermans help a Jew named Max by hiding him in their basement, Liesel makes a new friend. She and Max read together and Liesel tells him about her dreams and the weather. She becomes the word shaker.
This plot is beautiful. Its unique in every way and I've never read anything like it before. It had enough suspense to keep me on the edge of my seat, and up late at night unable to put it down. I was wrapped up in this book. I could see myslef right there with Liesel and Rudy as they go through their childhood.
The story's protagonist Liesel is an eleven year-old girl at the begining of the book. She is young and missing her dead brother and her missing mom. It takes her a few nights to trust Hans and Rosa Huberman which shows that Liesel is very cautious of her feelings. Her personality was perfect for this book and I kept wanting to see what adventures she and her friend Rudy would embark on.
Overall I really enjoyed this book. One thing though, that I didn't like, was the fact that Death gave away the ending in the middle of the book. Zusak switches from telling Liesel's story to talking about Death, and that's fine. But I was reading when all of a sudden it skips to a few years in the future and says how the book ends. (Including the death of some important people) I almost wanted to stop reading the book! Although I enjoyed the ending even though it was a tear-jerker, I didn't enjoy knowing the ending in the middle of the book.
*If Death hadn't ruined the ending, this rating would be higher.
Overall Rating: 4.5
Posted by Katie at 4:14 PM