The Fortunes of Indigo Skye

The Fortunes of Indigo Skye by Deb Caletti 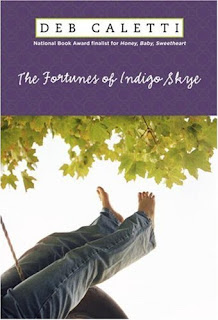 Pages: 298
"I suddenly see where I'm standing, and that's at the edgo of change - really, really, big change."
Eighteen-year-old Indigo Skye feels like she has it all - a waitress job she loves, an adorable refrigeratior-delivery-guy boyfriend, and a home life that's slightly crazed but rich in love. Until a mysterious man at the restaurant leaves her a 2.5 million-dollar tip, and her life as she knew it is transformed.
At first it's amazing: a hot new car, enormous flat-screen TV, and presents for everyone she cares about. She laughs off the warnings that money changes people,  that they come to relay on what they have instead of who they are. Because it won't happen... not to her. Or will it? What do you do when you can buy anything your heart desires - butwhat your heart desires can't be bought?
This is the story of a girl who gets rich, gets lost, and ultimately finds her way back - if not to where she started, then to where she can start again.

So, who wouldn't want to get a 2.5 million dollar tip at your amazing restaurant job? Indigo Skye tries to give back her tip, but the mysterious vespa guy won't have it. Indigo is determined that she will stay the same person that she was before, but can she really be sure? She lives with her mother, her little sister Bex, and her twin brother Severin in Seattle. She has an amazing boyfriend Trevor who is adorable and understands her in everyway. But after recieving the money, things start to change for Indigo. She buys her family and Trevor loads of stuff for their house and new cars and numerous other items. People around her start to expect that. They use her money without asking and take things too far. Quiting her job, letting her cat on the loose, and saving her brother from a rich, stuck up and uptight girlfriend cause her to take drastic measures and fly with her friend Melanie to California. Will the rich lifestyle take ahold of her? Or will she somehow find a way back to the girl she used to be? And if she does make it back can her family and boyfriend ecxept her back?

One thing about this book is that there are lots of comparisons. Similies and metaphors and just comparing things and openly thinking that normally writers don't use. Too many comparisons can be overwhelming sometimes. This book is pushing the border between just enough and too many. It does make the story interesting though. Sometimes the comparisons made me laugh out loud.

I also love the characters. Indigo is so adorable. Her love for waitressing is fascinating, and her refrigerator-delivery-guy boyfriend matches with her perfectly. Her little sister Bex is so adorable. She loves watching CNN and helping victims of tsunamis and other natural disasters. And her twin, Severin is completely unlike her: ready for college with scholarships from his straight A grades, and desperately trying to impress a rich girl from their school. This book was so enjoyable I was dissapointed when I closed the back cover. My love for Deb Caletti just keeps growing with each book I read by her.