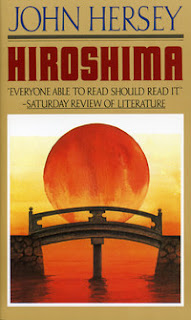 Pages: 152
WHEN THE BOMB DROPPED. August 6, 1945:
MISS TOSHINKI SASAKI, a clerk at the personal department of East Asia Tin Works, had just turned her head to chat with the girl at the next desk.
Dr. MASAKAZU FUJII, a physician, had just sat down to read the paper on the porch of his pricate hostpital.
FATHER WILHELM KLEINSORGE, a German priest, lay on a cot in the mission house reading a Jesuit magazine.
DR. TERFUMI SASAKI, a yound surgeon, walked along a hospital corridor with a blood specimen for a Wasserman test.
THE REVEREND MR. KIYOSHI TANIMOTO, pastor of the Hiroshima Methodist Church, was about to unload a cart of clothes at a rch man's home in the suburbs.

A HUNDRED THOUSAND PEOPLE WERE KILLED BY THE ATOMIC BOMB. THESE SIX WERE AMONG THE SURVIVORS. JOHN HERSEY TELLS YOU THEIR STORIES. AND IN THIS NEW EDITION, HE HAS RETURNED TO FIND THEM FORTY YEARS LATER... TO TELL YOU THEIR FATES.

Hiroshima starts out the morning of the bomb. It starts with the Reverend Mr. Tanimoto. It shows what happens to him as the bomb is dropped. Then it switches charater to Mrs. Nakamura and explains what she and her family does as the bomb is dropped. All six characters' expiriences with the bomb is showed in the first chapter. As the book continues it opens your eyes to the gruesome horror of what was the city of Hiroshima. The book shows each character's struggle to survive and the effect that the A-bomb had on them. It's interesting to read about their side of the story and how they prepared (and didn't prepare) for the attack, and what they thought the "noisless flash" of a bomb it was. The characters also thought the bomb only hit in their neighborhood. But when they open their eyes and get a look out into the rest of the city, they know. It was like nothing they had ever seen before.

The characters (which are real people in Japan) are very interseting. Since there are six different characters you have to pay attention to who is who or else the book will be very confusing. In the edition of the book I had, which was printed 40 years after the original, told what happened in the Aftermath of Hiroshima and how each of the character's lives turned out to be.

This book is considered nonfiction, although it is written so well and the devastation is so shocking that it seems like you are reading a story. It's a wonderful read that everyone should read. Beware, there are some very horrific scenes after the bomb was dropped about the fate of some of the people who were hurt and injured. I suggest you all to read it.