*WARNING! THIS IS THE SEQUEL TO INCARCERON. IF YOU HAVEN'T READ INCARCERON, AND YOU DON'T WANT TO SPOIL THE END OF THAT BOOK, DON'T READ THIS! (scroll down to see my review of Incarceron.)*

SAPPHIQUE. THE ONLY ONE WHO ESCAPED... AND THE ONE WHO COULD DESTROY THEM ALL. 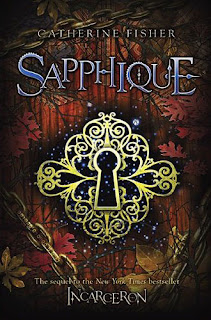 Incarceron, the living prison, has lost one of its inmates to the outside world: Finn's escaped, only to find that Outside is not at all what he expected. Used to the technologically advanced, if violently harsh, conditions of the prison, Finn is now forced to obey the rules of Protocol, which require all people to live without technology. To Finn, Outside is just a prison of another kind, especially when Claudia, daughter of the prison's warden, declares Finn the lost heir to the throne. When another claimant emerges, both Finn's and Claudia's very lives hang on Finn convincing the Court of something that he doesn't even fully believe.
Meanwhile, Finn's oathbrother Keiro and his friend Attia are still trapped inside Incarceron. They are searching for a magical glove, which legend says Sapphique used to escape. To find it, they must battle the prison itself, because Incarceron wants the glove too.
Oh boy. This book is one of the best sequels I've ever read. You can't expect a sequal to be just as good as the first book, and certainly this one isn't either, but it was pretty close. It picks up the story a few months from where Incarceron left off, but Fisher made sure you knew what happened in that time.

So, Finn: the heir to the throne. Real name? It's supposedly Giles. He is trying to remember his past as Giles. He hates life at the palace though. It's just another prison and a whole new game. He is about to go through a coronation that even he himself doesn't want, when it's all twisted around. A young boy objects his coronation... a young boy who is claiming to be the real Giles.

Claudia is trying to help Finn remember his past and also working with her tutor, Jared, to unlock Incarceron after the Warden took the keys. When the Pretender walks in and introduces himself though, Claudia has to help Finn remember, and they have to prove to the Court that the boy is a fake and the Queen is responsible.
Still stuck in Incarceron, Attia is traveling with a traveling magician and his crew. Secretly, she is searching for Sapphique's glove which, if you put it on, is supposed to show you the way out of Incarceron. When she gets it from the magician and leaves with Kiero, they set off on an unbelievable journey.
And finally, the prison. Incarceron is mad. Finn is gone and others are trying to Escape and see the stars. But, after Claudia tells Incarceron about Outside, it wants to see for itself. And to do it, it needs the glove, and Attia and Kiero's help.
Sapphique is great. There are a lot of different things going on at one time, so it can get a little confusing, but Catherine Fisher did a great job at keeping everything straight. This book's plot is just as suspenseful as Incarceron's was. It really kept me focused on each word and just dying to get to the end.
The main character, Finn, is just perfect. He is angry at Protocal and all the rules of the palace, and is royally ticked off at the royal family. When a boy shows up claiming to be the realy heir to the throne though, things change in Finn a little bit. He tries even harder to remember his past and to help Claudia and Jared unlock Incarceron. With new twist of a new heir to the throne, it makes Finn look even more suspicious. Since Finn is so different and unused to palace life, it makes him very easy to attach to and root for.
Overall, for a sequal, this book was amazing. There were some parts that were a little confusing, but I have to admit, I was rushing to the finish. I was dying to know what happened. Even being a sequal, this book won't dissapoint. So, if you haven't read Incarceron but decided to read this review anyways, go out and read Incarceron. If you have read Incarceron, I'm seriously suggesting you pick up this book.
Overall Rating: 4 stars
Posted by Katie at 4:56 PM