What My Mother Doesn't Know

What My Mother Doesn't Know by Sonya Sones 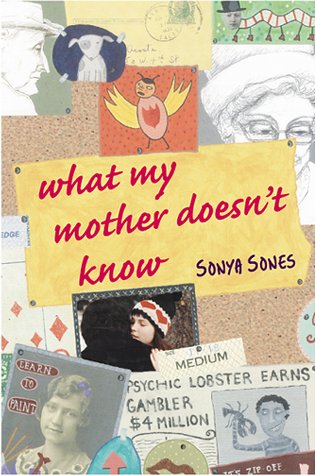 My name is Sophie.
This book is about me.
It tells the heart-stoppingly riveting story
of my first love.
And also of my second.
And, okay, my third love, too.
It's not that I'm boy crazy.It's just that even thoughI'm almost fifteenI've been having sort of a hard timetrying to figure out the difference
between love and lust.
It's likemy mindand my bodyand my heartjust don't seem to be able
to agree on anything.
The book starts out with Sophie breaking up with this guy. Then she meets a new guy, Dylan. They start daying, but while they are dating, Sophie meets a new boy over the internet: Chaz. Sophie decides there is no chemistry between her and Dylan, so she dumpls him. Now she feels better because now she can officially "date" Chaz. He turns out to be a creepy guy (don't worry she doesn't meet him in person or anything) so she leaves him. Then, at a school dance, seh dances with a mystery guy wearing a mask. When she can't figure out who he is, she gives up on him. After the mystery guy, she goes on a date with this other guy, but decides hi is too much like a brother. Finally, she starts dating this guy Murphy- a.k.a. Robin?- who every one thinks is really weird. Finally, at the very end of the book, (the last page.) I thought Yay! Finally there is a point to this book! It's not about what you are on the outside, but on the inside.
The plot was all right... if there was a plot. It jumped around a lot though and didn't get into very much detail. The book was written in short poems (which is actually really cool) and it only took my an hour to read.
The main character, Sophie, has like 10 nicknames that she is called by throughout the book, so pay attention in the begining when she lists them. She is waaay to young for this book though.  After I finished the book I reread the inside cover summary and realized this:
SHE IS 14 YEARS OLD.
Some of the tings she does is insane. She doesn't "go all the way" but she almost does, and other things happen along with is. In my opinion, this book was not worth reading. THere is like 5 guys and TONS of lust and some other things I didn't feel kids did or that I wanted to read about, but hey! What do I know? Maybe I'm stuck in a dream land from the time that I was fourteen. Yes, there were  goods parts to the book that made me laugh, but overall there was no point.
Overall Rating: 1.5 stars
Posted by Katie at 5:52 PM