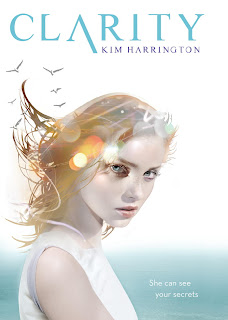 Pages: 242
Clarity "Clare" Fern sees things. Things no one else can see. Things like stolen kisses and long-buried secrets. All she has to do is touch a certain object, and the visions come to her. It's a gift.
And a curse.
When a teenage girl is found murdered, Clare's ex-boyfriend wants her to help solve the case--but Clare is still furious at the cheating jerk. Then Clare's brother, who has supernatural gifts of his own, becomes the prime suspect, and Clare can no longer look away. Teaming up with Gabriel, the smoldering son of the new detective, Clare must venture into the depths of fear, revenge, and lust in order to track the killer. But will her sight fail her just when she needs it most?

It's the first of June and I am one day and one book into my challenge! When I first heard about Clarity, it looked interesting. But when I saw the cover, it really turned me off. And I know you shouldn't judge a book by it's cover, but I did... and I've been proved wrong! I'm really excited I finally read this book.

Clarity is a pretty cool main character. She has pshycometry (I don't know if that is spelled right) where she can touch and object and see from someone else's point of view of something that happened in the past. I think that is the coolest gift ever! Except for maybe her mom who is a mind-reader. I don't think I would want her brother's gift -- talking to spirits.

One thing I really enjoyed about this book was the fact that it was a mystery, but it wasn't a horrifying mystery. There were many parts that kept me on the edge of my seat and turning the pages, but it wasn't heart-pounding, blood-pumping scary. It was intriguing. I was constantly guessing who the murderer was, and I was right! Well, half-right...

One thing I didn't like about this was the romance. There wasn't enough for me! She was all for Gabriel, then hated him. Then she was getting feelings for Justin. But, in the end, this may be a spoiler: caution!, I wish she had ended up with one of them! I really wanted her to get swept off her feet with sexy Gabriel, and if that didn't happen I at least wanted her to fogive Justin and go back to him!

I also wish Tiffany had been more involved in the story. She was mentioned in Clare's thoughts a lot, but she was really only in two of the scenes. I think a little conflict with that little brat would have been a nice change-up to the story.

Overall though I really enjoyed this book. It was entertaining and intriguing and I'm really happy I got past the cover and read it! If any of you are not reading this because of the cover, just ignore it! If you can, take off the jacket flap, or just don't look at it.