The Goddess Test by Aimee Carter 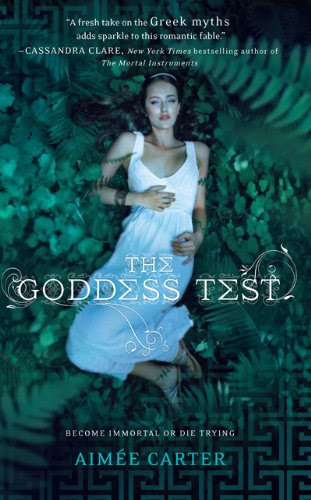 Pages: 293
Every girl who has taken the test has died.
Now it's Kate's turn.
It's always been just Kate and her mom--and her mother is dying. Her last wish? To move back her childhood home. So Kate's going to start at a new school with no friends, no other family and the fear her mother won't live past the fall.
Then she meets Henry. Dark. Tortured. And mesmerizing. He claims to be Hades, god of the Underworld--and if she accepts his bargain, he'll keep her mother alive while Kate tries to pass the seven tests.
Kate is sure he's crazy--until she sees him bring a girl back from the dead. Now saving her mother seems crazily possible. If she succeeds, she'll become Henry's future bride, and  a goddess.
If she fails . . .

I love Greek mythology, or history as referred to in this book, and it's always very interesting. I was intrigued by the cover and summary of this book so I thought I would give it a shot. I wasn't knocked out of my socks, but I wasn't too dissapointed with it either.

The characters were pretty well developed, and I loved Kate's emotions. You can tell she loves her mother dearly and that she would do anything for her. Kate has strong emotions and opinions throught the book that really brought the book together.

The one character relationship that I found strange was Kate and Ava. Ava was a total brat and tried to ditch Kate, and after Ava's accident, they were best friends and Kate said she would do anything to help her. They instantly clicked as if nothing had happened. I like to think I'm a nice person, but I don't know if I'm that nice.

When starting this book one thing I thought happened was that when the girls failed a test they died. The summary makes it seem that way. It was a whole new twist to the story when I started to realize what was really going on. So in one way I was dissapointed, but in another I was intrigued to figure everything out.

I found that the book dragged a little. I expected tests based off of skills of physical work and intelligence. Not knowing what the tests were was a little boring. Kate just adjusted to the lifestyle without really being "tested" in the way I thought she was.

I guess overall the book wasn't what I was expecting. It dragged a little and didn't seem to have a whole lot going on for much of the book, but it was such an interesting topic that it kept me wanting to finish the book. It's not one of my favorites, but I did like the ending and I will read upcoming books in the series.